The University of Lynchburg community lost a scholar, teacher, mentor, and coach on Monday, August 28, with the death of Dr. James L. Owens. A memorial service will be held Friday, September 29, at 3 p.m. in Snidow Chapel. 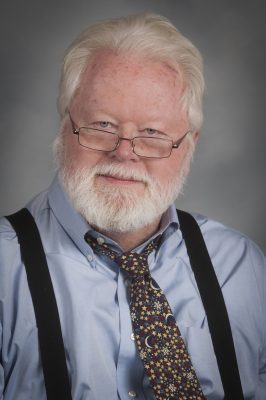 For nearly 50 years, Dr. Owens dedicated his life to teaching history at University of Lynchburg. He was one of the professors alumni sought out the most when visiting campus, and he received the Honorary Alumnus award in 2010.

Although he was trained as a scholar of southern history, Dr. Owens demonstrated wide knowledge of many subjects. “He was one of the best people I’ve ever known at interpreting the broad sweep of history,” said Dr. Julius Sigler ’62. “If you had a question about something that had happened in the past, it didn’t matter if it was in Europe or the United States or elsewhere, he had a grasp of how things were interconnected.”

Dr. Owens came to University of Lynchburg in 1969. The following year, he and Dr. Sigler began coaching the swim team while the swim coach took a sabbatical. Dr. Owens later volunteered to coach the water polo club team for many years.

Dr. Owens made a mark on the College’s academic life, including the development of an introductory history course that helped students prepare for historical research. Dr. Owens was a founding member of University of Lynchburg’s chapters of the honor societies Phi Kappa Phi and Phi Alpha Theta.

He developed a reputation for high standards, but he also worked to help his students meet those high standards and develop themselves intellectually. “He made history come alive, and he also made it challenging enough to make me feel like it mattered,” said Andy Nichols ’79. “He really made you want to do the best you could.”

Nichols recalled a final exam that required his group of three to work together for about nine hours and write 30 pages to respond to a complex question. Although it was difficult, the experience taught him to be diligent and avoid cutting corners — lessons that Nichols needed in his Navy service and in running his own business.

John Reilly ’86 agreed. “Dr. Owens taught me to really think, and he was brilliant at taking any side of a debate to get the best out of you,” he said. “He pushed, he held you accountable, and he prepared you for a world where you better be prepared and ready to work hard.”

Outside of teaching and coaching, Dr. Owens welcomed many conversations with students about life, politics, and current events. When Reilly and a friend were producing a radio show about the history of rock’n’roll, Dr. Owens shared his “massive collection” of vinyl records and provided commentary for the show. That was one of many examples of a professor playing a part in students’ lives. “Dr. Owens embodied what University of Lynchburg stands for,” said Reilly. “People like Dr. Owens are the heartbeat of the College, the heartbeat that changes lives.”